PRESS RELEASE: Cleaning Up with Michael Liebreich, Season 3 kicks off on April 14th with a conversation with Tony Blair

London, 14 April 2021: Season 3 of Michael Liebreich’s YouTube Channel and Podcast, Cleaning Up, will kick off on Wednesday 14 April at 6pm BST (7pm CET, 1pm EST, 10am Pacific time) with a conversation with Tony Blair.

In the 40-minute discussion, Tony Blair describes lessons that can be learned from the COVID-19 pandemic that are relevant to the climate crisis; he gives his thoughts on how to keep developing countries and fossil-fuel producer nations around the table at COP26; and he talks about how important joint leadership by the UK, Europe and the US will be.

“We’ve not cooperated globally [during the pandemic] nearly to the extent we should have, and we made it worse for all of ourselves. We could probably have shaved three months, maybe more, off the course of the pandemic.”

“The truth is, if we had incentivised the development of the science and technology in the right way some years earlier, we would have been a lot further along the path [towards addressing climate change].”

“When I was in office, a lot of people said well, look, [solar and wind power] is just crazy, it’s never going to be commercially viable, it’s never really going to work. You fast forward to today, there are a whole lot of things that the mainstream is saying in politics today that they would have derided 15 years ago.”

“Politically, it depends what you mean by emergency. Because the truth is, we have decided the pandemic is an emergency. If you decide politically that climate is this type of emergency, what is it you need to do? If you mean what you say, and it’s urgent, it requires a different political attitude.”

“The Third Way is a bit out of fashion nowadays, but let’s bring it back for this purpose [addressing climate change]! If you look at what has happened in the pandemic, governments set a framework, provided incentives, but the vaccines were developed by private sector companies.”

“For most people, their daily life is not affected by climate change. What that means is, there is a greater reluctance to take national measures, unless it’s part of a global picture. So, this is where the global politics will be very challenging, particularly given the position that America and China have with each other today.”

“The population of Africa will double over the next 30 to 40 years. All of these people need to consume, you know, they need electricity and power generation, they need ports, and rail, and airline links. If I go to these countries and say to them, well, I’m sorry, but because of climate change you guys have got to hold back economic growth. I mean, they’ll chase you out of the country.”

“One of the things I’ve been saying to people about this COP process is you’ve got to bring these developing countries into the dialogue. And you’ve got to be offering them the solutions that allow them to consume sustainably.”

“One of the things that was part of [the UAE’s] thinking on the rapprochement with Israel, which is something I worked on, is that it wasn’t just about security and the threat of Iran. It was also a desire to work with Israel in developing some of the technology of the future.”

“I’m optimistic that there are solutions. But I do think it’s going to require a lot of leadership from America and from Europe, the UK, in order to get there.”

A full transcript of the conversation is available (see contact details below).

Previous Guests on Cleaning Up

Previous episodes of Cleaning Up have included conversations with the following:

Amber Rudd – former UK Secretary of State for Energy, representing the UK in the negotiations leading up to the Paris Agreement
Bertrand Piccard – pioneering round-the-world balloonist and solar-powered aviator
Baroness Bryony Worthington – lead author of the UK’s historic 2008 Climate Change Act
Christiana Figueres – Executive Secretary of the UNFCCC from 2009 to 2010, architect of the Paris Agreement
Claire Perry O’Neill – former UK Secretary of State for Energy, who prepared the legislation for the UK to target net zero emissions by 2050 and led the bid for Glasgow to host COP26.
Emma Howard Boyd – Chair of the UK Environment Agency
Professor Ernie Moniz – Secretary of Energy under President Obama from 2013 to 2017
Fatih Birol – Executive Director of the International Energy Agency (IEA)
Greg Jackson – CEO of Octopus Energy, UK’s fastest growing utility
Jigar Shah – recently promoted to Director of the Loans Program Office at the US Department of Energy
Nancy Pfund – Founder and Managing Partner of DBL Partners, First Institutional Investor and former Board Member of Tesla
Robin Chase – Founder of Zipcar
Professor Steven Chu – Secretary of Energy under President Obama from 2009 to 2013
Teresa Ribera – Deputy Prime Minister of Spain and Secretary of State for the Ecological Transition and Demographic Challenge
Lord Zac Goldsmith – UK Minister of the Environment and Minister for the Pacific

Once a week Michael Liebreich has a conversation with a different leader in clean energy, mobility, climate finance or sustainable development.

Each episode covers the technical ground on some aspect of the low-carbon transition – but it also delves into the nature of leadership: whether to be optimistic or pessimistic; how to communicate in order to inspire change; personal credos and so on.

The conversations are engaging, informative, inspirational and most of all – fun, as many of the guests are friends of Michael’s.

Michael Liebreich is Chairman and CEO of Liebreich Associates, through which he provides advisory services and speaks on clean energy and transportation, smart infrastructure, technology, climate finance and sustainable development.

Michael is the Founder and Senior Contributor to BloombergNEF, which he created in 2004 and ran until after it was sold to Bloomberg LLP in 2009. He is an Advisor to the UK Board of Trade and serves as advisor to Equinor (Norway’s national energy company), Sustainable Development Capital (Europe’s leading investor in energy efficiency), the UK’s Clean Growth Fund and Eavor Technologies (global leader in closed loop geothermal energy). He chairs smart bus startup, Zeelo.

Michael is a Visiting Professor at Imperial College London’s Energy Futures Lab. He serves on the advisory boards of the OECD Centre on Green Finance, Imperial College’s Masters programme in Climate Finance and Management, the Hawthorn Club (a network for senior women in energy), the Greenmap Association (an NGO focusing on the financing of renewable energy in the developing world) and Ignite Power (a provider of distributed solar power in Africa). He is the founder of Moving Mountains (a charity focused on the sustainability of mountain communities) and the Liebreich Foundation.

His previous roles have included serving on the board of Transport for London, as an advisor for Shell New Energies and on the High Level Group for Secretary Ban Ki Moon’s Sustainable Energy for All. He has been a member of the World Economic Forum’s Global Agenda Councils on Sustainable Energy and the New Energy Architecture and served on the advisory board of the Clinton Global Initiative’s Energy and Climate Change Working Group. For over a decade, Michael was trustee and chair of St Mark’s Hospital Foundation, a bowel medicine charity. Prior to founding New Energy Finance, he helped build over 25 companies as a venture capitalist, entrepreneur and executive, and before that he worked for McKinsey and Company.

Michael has an MA in Engineering from the University of Cambridge, where he won the Wyatt Prize for Engineering and the Ricardo Prize for Thermodynamics, and an MBA from Harvard, where he was a Harkness Fellow and Baker Scholar. Michael has won several lifetime achievement awards and is a two-time finalist in the Ernst & Young Entrepreneur of the Year Awards.

Michael skied for Great Britain at the 1992 Albertville Olympics.

For more information or an interview with Michael Liebreich, please contact Jo Jagger on +447956313010 or jo@liebreichassociates.com

A full transcript is available on request. 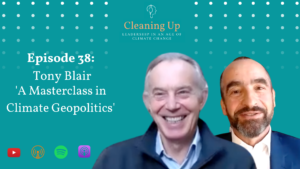 The Emptiness of Doebbler – a D...

During this year’s Davos meetings, I made sure to visit the Occupy WEF camp. There I met…

Here we are in the first weeks of a new decade, and I wanted to give you an…

The shock of Covid-19 lockdowns hit the world’s urban transportation systems like a heart attack. As discussions now turn to…